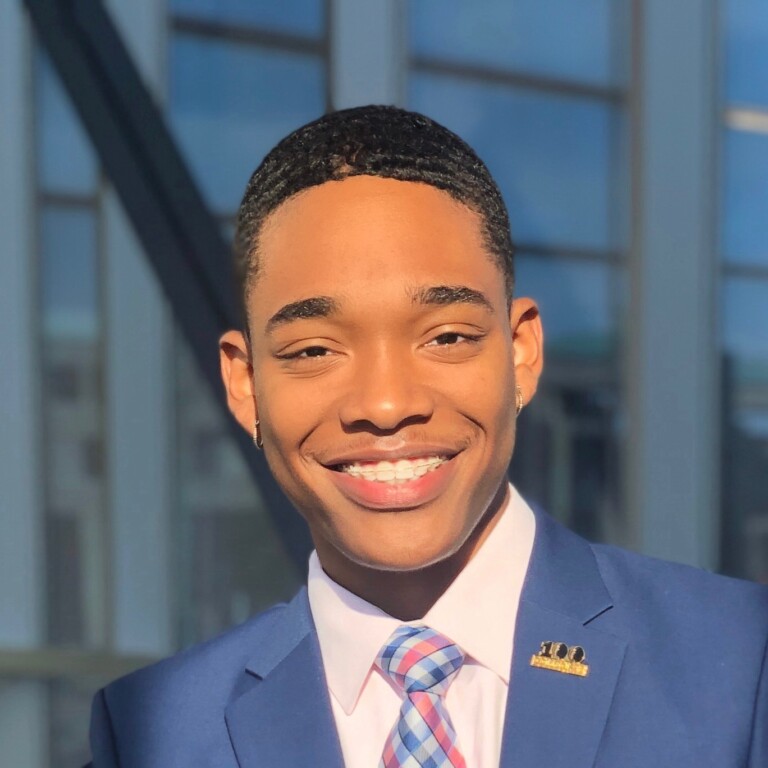 In 3rd grade Howard University Collegiate 100 President Rasheed Muhammad got a “B” on a progress report.  Based on his mother’s expectations of him, it was so concerning that she scheduled a conference with his teacher to discuss the situation.  After the parent-teacher conference Rasheed’s mother came home and sat him down.  She looked him directly in his eyes and said:

His mother’s message took hold, and Rasheed vowed that day that he would never get a “B” on a report card again.  In true Rasheed Muhammad form, he has never received less than an “A” in elementary school, middle school, and high school. Rasheed would eventually go on to become valedictorian of his high school class, as well as a member of the National Beta Club, the National Honor Society, the National English Honor Society, and the Better Business Bureau Students of Integrity.

When the time came to pick which university he’d attend, there wasn’t much of a decision to be made.  Rasheed’s mother was a Howard University graduate and made clear the importance of going to college, preferably for free on an academic scholarship.  His sister was part of the Howard University class of 2015, and Howard was his dream school since he started attending Howard Homecoming when he was 12 years old.

Despite his strong ties to Howard University, and the offer of a full free-ride academic scholarship, Rasheed did his due diligence and applied to several other top universities, all HBCUs.  Morehouse College accepted him, and even offered him more scholarship money, but Rasheed’s ties to Howard were too strong.  He accepted the offer of a full-ride academic scholarship and became part of the Howard University Bison.

Outside of the incredibly positive influence of his mother, Rasheed attributes a large part of his success to having the privilege of growing up in Atlanta.  He calls it an excellent place for budding young professionals, as well as seasoned Black professionals.  Growing up, his mentors were primarily Black lawyers and judges.  Georgia Superior Court Judge Kimberly M. Esmond Adams went to Howard University with his mother and would let him sit in the jury box as she decided cases.

In Atlanta seeing, and having access to, a large number of Black professionals and entrepreneurs on a regular basis had a positive impact psychologically on Rasheed.  It gave him the belief that nothing was off limits.  He stated that he doesn’t know if he was in a different environment if he’d have the same mentality of believing that he was capable of doing anything.  Rasheed never felt that his skin color was an impediment or barrier to him achieving his goals, because he saw it being done.  If he didn’t know someone personally, he knew someone that knew someone that was doing it.  What they see truly is what they’ll be.

As the new President of the Howard University Collegiate 100 chapter Rasheed has a number of things on his “To-Do” list.  At the top of the list is a desire to re-brand the organization, and to determine what the Collegiate 100 is going to be known for on campus.  Historically, the Howard University Collegiate 100 has attracted some of the most exceptional students on campus, the “heavy hitters”.  While Rasheed still wants to maintain the prestige associated with that, he also wants to ensure anyone that is motivated, committed, and selfless feels welcome in the chapter, and that the organization casts a broad net and attracts scholars with a range of skill sets and backgrounds.

The next steps for Rasheed include graduating in 2021, and taking some time off to relax and prepare for the LSAT.  He plans to go into political consulting prior to going to law school.  The law schools on the top of his list include Howard University, Georgetown, NYU, and Harvard.  Based on his concern for international refugees and global injustice, Rasheed is interested in international litigation and arbitration as specialties in his legal career.  Based on his track record of success so far, we have no doubts that Rasheed will achieve his goals.